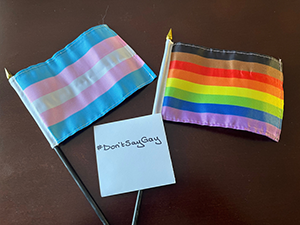 As per the ‘Don’t Say Gay’ bill in Florida, rainbows are no longer welcome in the sunshine state. With gender discrimination threatening the mental health and future of the LGBTQ community, the new bill is another blow to a movement that was years in the making.

What is the Don’t Say Gay Law?

Florida’s Parental Rights in Education Law (aka Don't Say Gay bill) restricts teachers in the state from discussing or saying anything related to sexual orientation and gender in classrooms. While the bill is legal because it is a law now, people across the US and even the White House have called it a disturbing trend that is targeting members of the LGBTQ community. Several groups are challenging the bill with varying degrees of success.

The law was signed into effect on March 28th of this year. It prevents kindergarten to third-grade teachers from discussing sexual orientation and gender issues in their classes. The law also controls what they can and cannot say to older students regarding this topic. The latter will come into effect when instructions on age-appropriate materials are developed.

Republican governor Ron DeSantis repeatedly asserted that the law would only allow parents of children (between kindergarten and third grade) more control over their education. This includes barring teachers from discussing LGBTQ history and events.

The Potential Effects of the Don’t Say Gay Law

According to the Centers for Disease Control and Prevention, Florida has some of the highest suicide rates in the country. It is higher than the national average, and officials have admitted that LGBTQ youths experience mental health challenges and have suicidal thoughts more than others. These facts have been pushed under the rug by conservative House and Senate members to the detriment of the community.

The law is broad, so it can effectively prevent teachers in Florida's public schools from discussing anything related to the LGBTQ movement and gender identities. They fear they will be fired or sued by conservative parents. In other words, the new law is supporting a culture of fear to the point that parents and even educators are terrified of touching anything related to the topic to protect their reputations.

The law has been harshly criticized in Florida and condemned across the nation. Before the bill was signed, entertainment industry members such as show hosts called for it to be abolished because of its negative stance on the LGBTQ movement. Disney only spoke out against gender discrimination when it was pressured to do so.

Equality Florida sued the state because of the lasting damages the bill is already doing to the community. As per the suit, the law violates the First Amendment rights of the community to debate ideas based on sexual orientation and gender issues. In other words, it violates their right to free speech since the law prevents them from discussing these issues in classrooms. So while we can say that the new bill is legal, its implications may have devastating consequences, including gender discrimination.

Contact the Law Office of Michael T. Smith & Associates For a Consultation Today!

If you faced discrimination in the workplace because of your gender and are searching for a professional Chicago employment discrimination attorney in Schaumburg, IL, contact us today! At the Law Office of Michael T. Smith & Associates, we offer confidential consultations to all our clients who are treated unfairly in their workplaces. Allow us to help you get the compensation you deserve!

Illinois Pregnancy Laws That Employers Must Follow What Rights Are Protected Under The Civil Service Reform Act? Can Extreme Political Views Be Considered a Hostile Work Environment? How to Properly Document Workplace Abuse